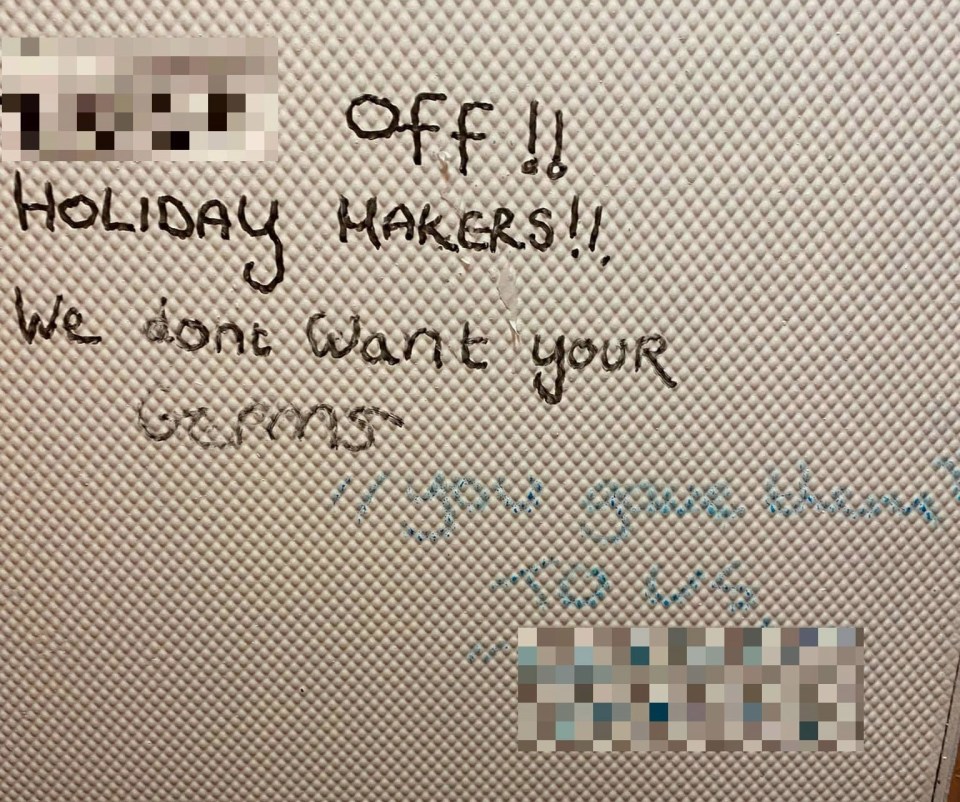 MORE graffiti in Cornwall has sparked fury from locals, with vacationers advised to “f*** off.”

It follows comparable sentiments echoed earlier this yr, after the seaside area noticed an enormous growth in guests throughout the summer season.

Some of the current graffiti and stickers learn: “F*** off holiday makers. We don’t want your germs.”

The stickers, present in a block of bogs in Mevagissey, close to St Austell, sparked fury amongst each the attendees and locals.

Gary Farr, who manages the general public bogs on behalf of the council, told Cornwall Live: “You have no idea the stress this is putting on the already exhausted attendants and phone calls from the public I am having to deal with.”

He added: “I just want to put out a plea to whoever is doing this to stop.

“All you are doing is taking time and money out of the village to put these things right.”

Jenny, who shared the message on Twitter, commented: “Nice to feel welcome in Mevagissey today.”

One native additionally stated: “Christ, what’s wrong with these people.”

Back in August, indicators in Cornwall have been graffitied with anti-tourist phrases telling guests to “go die”.

During the summer season, Cornwall turned one of many worst hit areas of the UK for Covid with consultants saying it was worse than some crimson listing international locations.

This led to Visit Cornwall boss Malcom Bell urging guests to get examined earlier than arriving.

Visit Cornwall estimated a document 210,000 individuals visited the area this summer season, up 30,000 in comparison with the earlier yr.

Not solely did this result in fuming locals as a result of enormous crowds, however holidaymakers slammed the realm as being “too expensive” and “too busy”.

One household left their vacation early after saying there was too many individuals there, going so far as to say Newquay ought to have been on the journey ban listing, whereas one other vacationer slammed the seashores for having an excessive amount of seaweed.