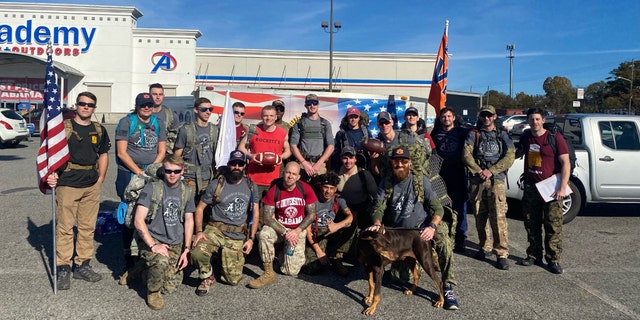 Student veterans in Alabama started a greater than 150-mile ruck march on Wednesday from Tuscaloosa to Auburn to raise awareness for the estimated 17 veterans misplaced to every day to suicide.

The fourth annual Operation Iron Ruck — which options students from the University of Alabama and Auburn University — kickstarted outdoors of Bryant-Denny Stadium Wednesday in Tuscaloosa and can conclude Saturday at Jordan-Hare Stadium in Auburn simply earlier than the rival colleges’ soccer groups face off in the Iron Bowl.

The 72-hour march consists of marchers from each colleges, most carrying a 17-pound rucksack containing donated objects that shall be given to charities which profit Alabama veterans.

Student veterans march from Auburn to Tuscaloosa in the course of the Operation Iron Ruck march in 2020.
(Slade Salmon)

“The event spans the course of three days, and our objective is to raise public awareness of veteran suicide, with the secondary objective of raising donations for national, state and local veteran charity organizations,” Salmon instructed Fox News in regards to the march.

Salmon stated the occasion is “a way for us to memorialize the 17 veterans who die everyday due to suicide” and famous that he makes use of the occasion to reconnect with these he served with.

“I’m not great at staying in touch with a lot of people I served with, but I make an effort to reach out during this time,” Salmon stated. “Isolation is a major factor in veteran suicide. Reaching out to those we served with could be the catalyst in saving a life.”

“Many veterans, myself included, personally know another veteran or service member who have succumbed to suicide,” Buchanan instructed Fox News. “Through Operation Iron Ruck and the collaboration of the student veterans of Auburn and Alabama, it truly shows that the veteran community is strong and committed to take care of our brothers and sisters until 17 becomes zero.”

Alabama Gov. Kay Ivey has voiced help for the march organizers’ efforts, saying in a press release, “It is imperative that, as a nation, we never forget to offer our support to the brave men and women who have served our country in the military.”

“We must put a greater focus on preventing veteran suicide and on supporting these brave men and women after they return home, which is why I am so proud of the efforts of our student veterans embarking on Operation Iron Ruck,” Ivey stated. “Our military men and women put it all on the line to ensure our freedoms, and we owe them a debt of gratitude. Alabama will always stand behind our veterans.”

As Arizona’s attorney general and a first generation American, I’m grateful for the USA