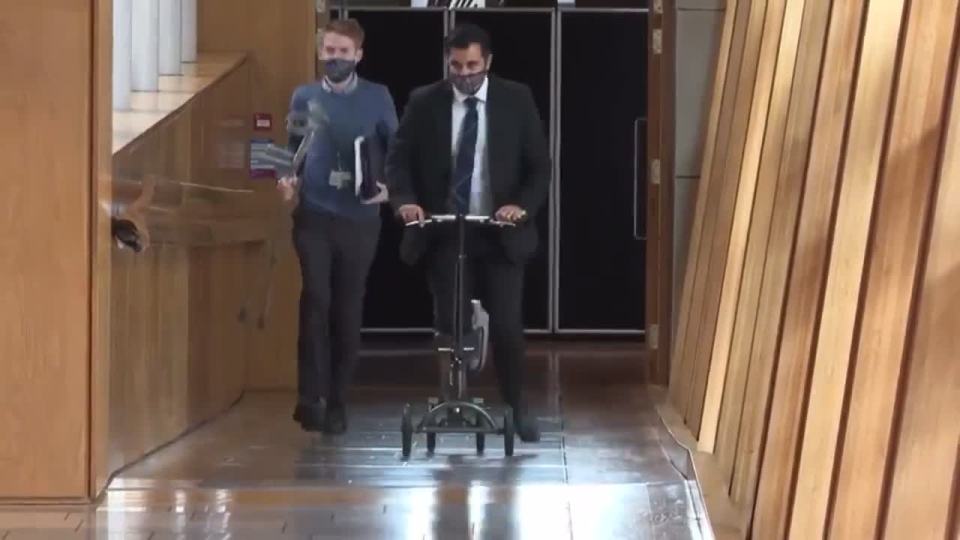 THIS is the second the Scottish Health Secretary decks it off a mobility scooter at Holyrood – as he races to debate the ambulance disaster in Scotland.

TV cameras had been stationed to seize MSPs forward of First Minister’s Questions.

Mr Yousaf, who has been utilizing the mobility transport since rupturing his achilles tendon collaborating in badminton, was arriving to reply questions from MSPs on Scotland’s ambulance disaster.

And the cameras picked up the second the SNP minister was despatched flying from the scooter – while an aide ran behind him holding a pair of crutches.

He posted it on Twitter with the caption, “The health secretary @HumzaYousaf does not appear to be having a good day at work…”

However Mr Yousaf was reasonably displeased with the political editor’s tweet.

Taking to social media himself, he talked about there was “no need” to share the video.

He posted: “All for media scrutiny & in no way draw once more from it.

“Just unsure there may be want or objective to tweet out a video of me falling over while injured.

“If anyone else had fallen over while on crutches, a knee scooter, or in a wheelchair would your first instinct be to film it & tweet out?”

But this was a really totally utterly completely different response than the one he had after Douglas Ross was caught on digicam falling in 2018.

At the time, he tweeted: “Best second of the 2nd half – Douglas Ross MP decks it a belter!

Social media shoppers have had an equal response to Mr Yousaf’s unlucky fall.

One particular explicit individual commented: “Brilliant. The gift that keeps on giving.”

Another talked about: “Swear a thought this was a parody video.”

Someone else posted: “Denmark’s Health Minister gets about on a space hopper apparently.”

It comes after Mr Yousaf was accused of risking lives for telling sick Scots to suppose twice before calling an ambulance.

The SNP cupboard minister was branded “reckless” for his title amid major pressure on the 999 response service, which has seen widespread waits for paramedics hit six hours.

He warned the NHS was going through an “extraordinarily difficult winter”, and talked about individuals who had been “picking up the phone to call 999 to call an ambulance” ought to contemplate if that is “absolutely critical”.