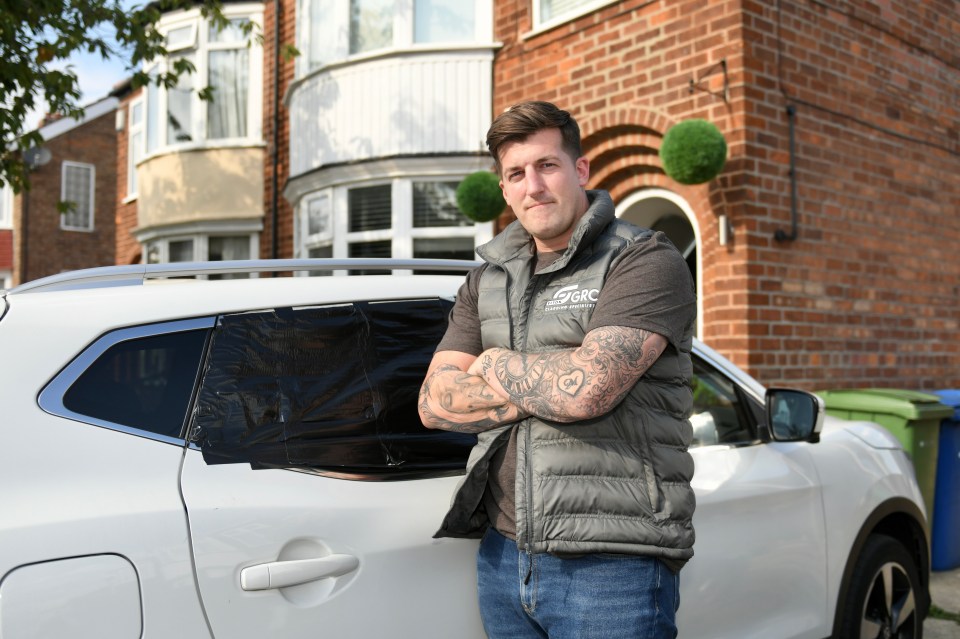 THIS is the second a “sneaky” council worker smashes a dad’s car window with a lawnmower – before trying to cover it up.

Furious Jay Elton, from Hull, found a window of his motor had been shattered one morning – however after reviewing his doorbell CCTV footage found what had occurred.

The 31-year-old seen the smash was attributable to a council worker whereas he was chopping grass in Willerby.

CCTV footage reveals the lawnmower going backwards and forwards on a strip of grass before a part of the machine hurtles throughout the route of the car window.

Moments later, the worker might probably be seen pacing the pavement with his palms on his hips before deciding on up stone from Jay’s entrance yard – which he says had been positioned spherical his car as a cover-up.

Dad-of-two Jay recommended HullLive: “It was really deceitful, he was trying to make it look like it was our fault in some way.”

But when the fuming dad contacted East Riding of Yorkshire Council with regard to the incident on September 6, they recommended him he wouldn’t be compensated.

They denied obligation as they’re saying the operative had made obligatory checks to guarantee there was nothing hidden all through the grass.

Jay talked about: “I put an insurance coverage protection safety declare in and located yesterday that I can’t be getting it on account of they declare he had checked the realm before mowing the realm. But I can see in my digicam that he didn’t.

“I feel really sad as a council taxpayer that this is how we are treated.

“Accidents are accidents, we can all live with them, but this sly sneaky behaviour is not acceptable and not for council taxpayers.”

Jay says he is been pressured to fork out £550 to change the window – and had to promote his five-year-old daughter’s pony to get the money.

He added: “I’ve had to stroll my daughters to college all through the rain on account of the car window is damaged.

“It’s been raining and the back of the car would get soaking wet because there is no window there.”

Do you have got gotten a narrative for The Sun info desk?