Nikki Haley on Gen. Milley’s phone calls: ‘You have the back of your president,’ not China 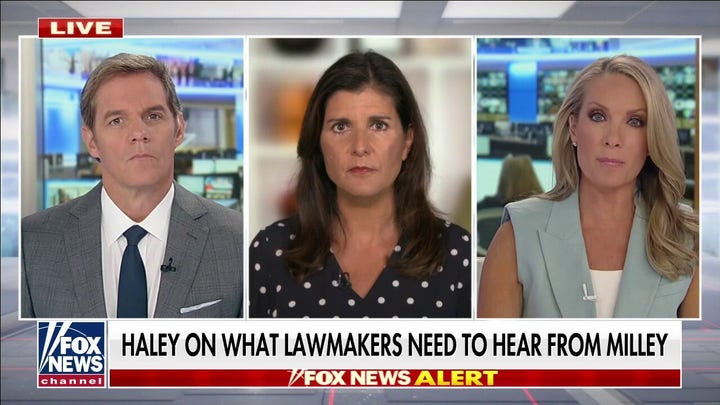 Nikki Haley, former U.S. Ambassador to the United Nations, acknowledged on “America’s Newsroom” Thursday Chairman of the Joint Chiefs of Staff Gen. Mark Milley has plenty of inquiries to reply at a Sept. 28 Senate listening to.

“You don’t have the back of the Chinese, you have the back of your president,” acknowledged Haley, reacting to experiences Milley often known as Chinese officers at the finish of the Trump administration

Haley acknowledged all by way of her time in the Trump administration she noticed that “there were multiple members of the administration that thought they knew better than the president.“

The former South Carolina governor acknowledged that though it’s not uncommon for worldwide locations like China and Russia to name, the query lies with why Trump would have been unnoticed of the loop.

Former displaying Secretary of Defense Christopher Miller, who led the Pentagon from the interval after the 2020 election by manner of Inauguration Day, acknowledged that he “did not and would not ever authorize” Chairman of the Joint Chiefs of Staff Gen. Mark Milley to have “secret” calls collectively collectively together with his Chinese counterpart, describing the allegations as a “disgraceful and unprecedented act of insubordination,” and calling on him to resign “immediately.”

Haley well-known that it’d have been good to double-check with the commander-in-chief first if Mark Esper, the former United States Secretary of Defense, requested Milley to have excessive discussions with the Chinese.

He “should have had a conversation with the president and said, ‘we have intel that the Chinese are worried we’re going to start some sort of war action. We’re going to give them a call. This is what we’re thinking. Are you OK with that?'” Haley acknowledged.

“There are more questions than there are answers. I think we need to get answers to that. Look, everybody’s suspicious of Milley when we already look at what happened in Afghanistan.”

Former displaying Secretary of Defense Miller went on to reference the allegations, which could be included in the e e-book “Peril,” co-written by Washington Post reporters Bob Woodward and Robert Costa, that Milley made two secret phone calls, each to his Chinese counterpart, Gen. Li Zuocheng of the People’s Liberation Army.

Fox News spoke with a amount of people who had been in the room all by way of the two phone calls Milley had with Li. The calls, in October, had been coordinated with then-Defense Secretary Mark Esper’s workplace.

“They were not secret,” a U.S. official urged Fox News about the calls, which occurred over video teleconference.