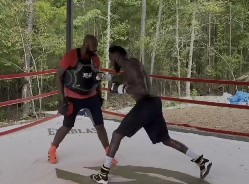 DEONTAY WILDER has showcased his velocity and energy in an Instagram video displaying him smashing the pads for 12 rounds.

The 35-year-old is making ready to face Tyson Fury for a 3rd time at the T-Mobile Arena on October 9 the place he’s seeking to win again the WBC heavyweight title.

Neither man has fought since February 2020 the place the Gyspy King inflicted the Bronze Bomber’s first skilled loss.

Following that conflict, the second between the pair, Wilder has appointed former opponent Malik Scott as his head coach.

Scott believes that the 2008 Olympic bronze medallist will knock Fury out inside FIVE rounds, claiming his American compatriot’s mentality is ‘very violent’.

And Wilder has taken to social media to share footage of him contained in the ring training, as he hammered away at the pads for 12 rounds.

In the six-minute Instagram clip shared to his 2.7 million followers, the Alabama native might be seen concentrating on Scott’s physique.

This may point out that Wilder is wanting for a physique shot KO having primarily targeted his energy punches on the pinnacle of an opponent throughout his profession thus far.

Despite his spectacular health durng the video, followers had been lower than impressed together with his mixtures as they predicted one other Fury victory.

Commenting on the clip, one person mentioned: “Bruh I just wish you put your damn hands up. Good training and you look in great shape but those hands down is what got you caught vs Ortiz 1st fight and Fury.”

A 3rd added: “No chance whatsoever against Fury.”

One then remarked: “No footwork still going to lose.”

However Wilder is assured of turning into a two-time world champion as he claimed that he’s a ‘harmful’ man.

Speaking on the PBC Podcast, he mentioned: “I’m a harmful man at this time limit.

“Malik [Scott] and my staff have introduced one of the best out of me, and I’m simply prepared.

“But it don’t imply nothing when you can’t present it to the remainder of the world, and I do know that. I’m prepared to take action. Don’t blink, child. Don’t blink.”